Conservation Manager Derek Poultney and I were between the 101 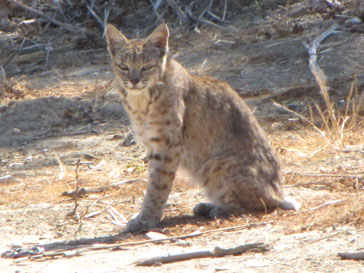 overpass and the railroad trestle when we heard the footsteps.  We returned to the area a few days after our most recent volunteer workday to make sure no one returned to the illegal campsite we just cleared.  As we stood in the clearing, we heard the sounds of something moving in the brush between us and the estuary. Something big.  Expecting another meeting with a camper, we began announcing our presence, but there was no reply.  Instead, the sound grew louder and closer. Suddenly there emerged three mule deer, led by a young buck with tiny budding antlers about the size of my thumbs.  Stunned and elated we each began fumbling through our pockets to snap a quick pic with our camera phones, but our movements were quickly noticed and they bounded off north along the trail toward the Main Street Bridge, where pedestrians have reported multiple deer sightings in the area.

A few months earlier on our weekly patrols, Derek and Conservation Assistant, Dashiell Dunkell, kept waking up the same bobcat along the trails of the Willoughby Preserve.  At one point, the bobcat actually sat and posed for Derek!  Other notable sightings include the endangered least Bell’s vireo, Swainson’s hawk, belted kingfisher, king snake, and the return of the egrets and herons now that the preserve is clean, free of illegal campers and being restored.