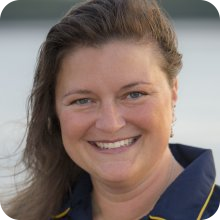 On Thursday, July 25 at 7 PM, join Ventura Land Trust at the Museum of Ventura County's Pavilion (note new venue) for a free community lecture entitled: Fascinating Discoveries from the Deep Blue Sea. This next installment in VLT's ongoing Environmental Speaker Series will feature Santa Barbara Museum of Natural History Development Officer Melissa Baffa, who served as a Science Communication Fellow with the Ocean Exploration Trust, sailing on the E/V Nautilus in 2015, 2016, and 2018.

Despite their vast importance throughout human history, only about 5% of the world’s oceans have been studied in great detail. Melissa Baffa will shares stories of her amazing adventures exploring the deep sea alongside pioneering ocean explorer Dr. Robert Ballard. In 2015 she accompanied Dr. Ballard to the Galapagos Rift Zone during his first trip back to the hydrothermal vents he discovered in 1977. Since then, she has also explored the deep basins and ridges along the Southern California coastline and a seamount off the coast of Monterey.

Melissa blends a background in biology, a passion for the ocean, and a gift for public speaking with effortless ease. Don't miss out on this chance to listen and learn about one of our earth's last unexplored wilderness areas - the ocean.

Ventura Land Trust’s Environmental Speaker Series, now in its fourth year, is one of the many ways VLT works to educate the public about important environmental topics. Although free to the public, a $10/person donation is suggested at the door.