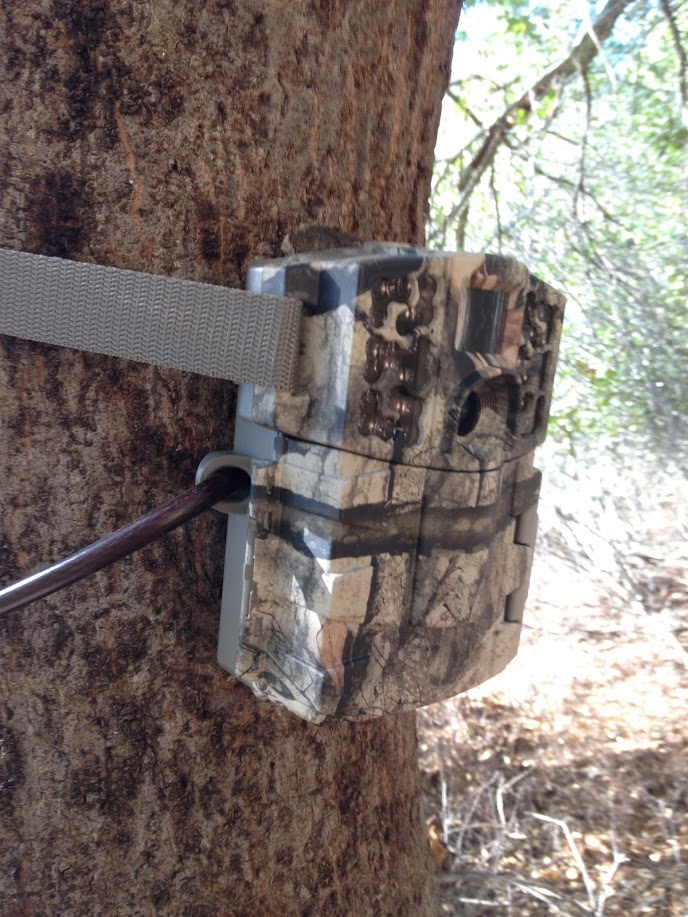 At two o’clock on a foggy morning, chances are you won’t be sitting in a blind waiting to see wildlife in Ventura’s Hillsides. But that is often time wild animals are hunting, traveling and looking for mates. Many of our local mammals are active from dusk to dawn, including skunks, raccoons, opossum, gray foxes, bobcats, coyotes and mountain lions.

Increasingly wildlife biologists, nature enthusiasts and educators are using an exciting new observation tool to peer into the lives of wild critters. Trail or “game” cameras allow you to take wildlife photos in remote, wild areas or your backyard 24-7, even while you are at home relaxing.

Trail cameras use motion sensing and infrared technology. When an animal triggers a camera’s motion sensor, it takes a photo using either available daylight, a visible flash or invisible infrared light. Some cameras take both photo and video, and others will even email photos to you from a remote site. To prevent theft, trail cameras can be secured to trees with cable locks, or enclosed in steel lock boxes.

In a number of ways, wildlife “camera trapping” is becoming very useful to biologists, land managers, city and county officials. The devices can help determine how many coyotes are living in the hills, or the number of raccoons occupying a city neighborhood. Increasingly, scientists are using the cameras in a grid pattern to track and identify individual animals, rather than have to trap, sedate and mark them with radio collars and / or identification tags. By knowing how many animals are living in a given area, where they are travelling and being able to identify individuals, biologists and agency officials can make better wildlife management plans and decisions.

As an urban wildlife biologist, I’ve had some exciting results using remote cameras. I’ve been able to ‘capture’ black bears on a ranch above Lake Casitas, ‘see’ rare ringtails drinking at a hidden spring in the Ojai Valley, and keep tabs on our local coyotes and bobcats who roam the Ventura Hills. Once on a rainy night in Santa Barbara County, a huge mountain lion triggered one of my cameras on a residential driveway while I was snoring away in a house nearby. 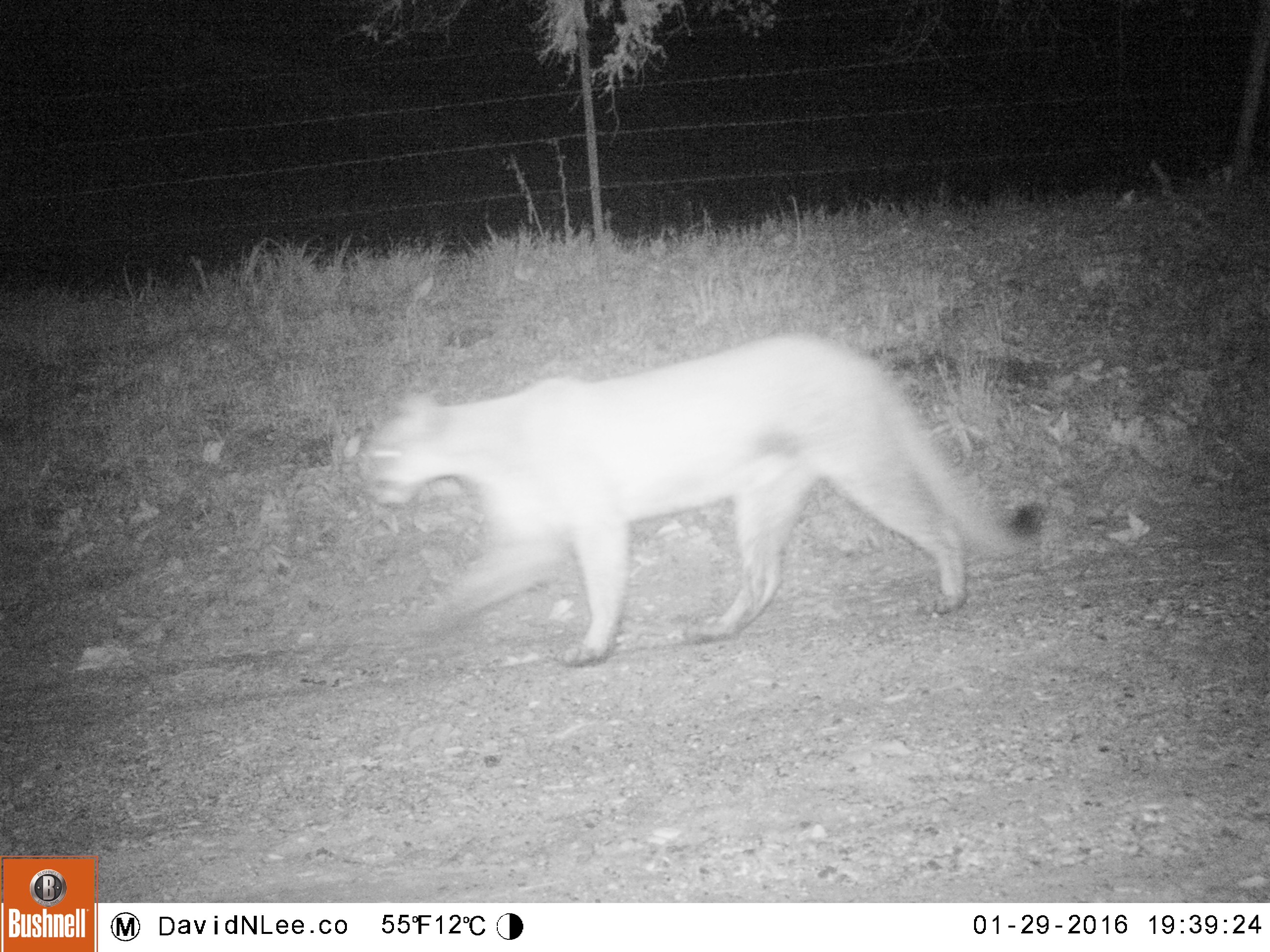 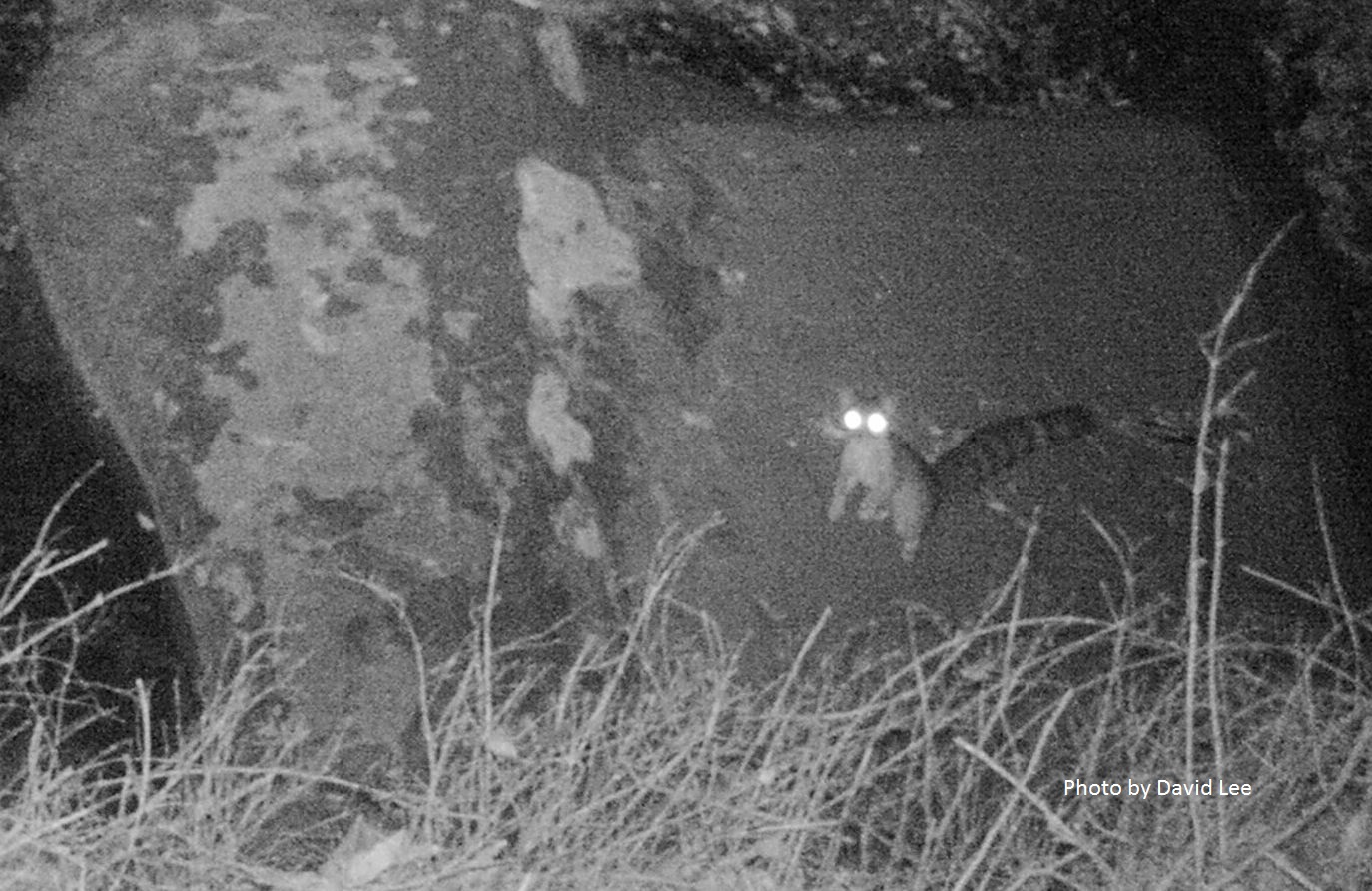 Conservation biologists can now track and monitor rare wildlife all over the world. According to Ron Tilson of the Sumatran Tiger Project (Indonesia), trail cams “will revolutionize knowledge of tropical conservation biology. I've seen more species in the last two years than I've seen in fifteen previous years in the field, especially of rare and reclusive animals like the Sumatran rhino.”

Remote cameras were highlighted on a recent 60 Minutes show on LA mountain lions. “Camera technology has revolutionized the way mountain lions and other wild animals are studied,” said Bill Whitaker, 60 Minutes host. “Johanna Turner is a sound effects editor for Universal Studios. On her own time, she's one of several citizen scientists… who put remote cameras up in the wild, hoping to get that perfect shot.”

Camera traps monitored by a group of volunteers can provide greater amounts of objective data and cover a larger survey area than could any one team of scientists. A National Wildlife Federation article features William McShea of the Smithsonian Conservation Biology Institute and his partners who capitalized on the estimated 2 to 3 million people who use the Appalachian Trail every year. They recruited 50 volunteers from hiking and nature clubs with access to the trail. Between 2007 and 2009 they monitored mammal activity at 447 camera sites along 636 trail miles from southern Pennsylvania into Tennessee.

Early study results provide a snapshot of the impact on human activities along the trail. For example, hunting on adjoining lands steers away black bears, bobcats and deer, but seems not to bother opossums. Deer and bears seem to avoid hiking trails, whereas red foxes use them. Coyotes avoid roads, while deer seem attracted to them. Protected forest cover appears to be important habitat for almost all the mammals.

Ventura residents can also become volunteer citizen scientists by installing trail cams in their back yards, and with permission, on public lands. The hobby is fun and rewarding, and the information and images you gather and share can greatly expand data available to wildlife biologists, land planners and educators.

If you are interested in learning how to install and operate trail cameras, here are some resources:

Topics will include where and how to set up trail cams, camera selection and operation, field practice and evaluation of camera trap results, and sharing your photos with others. July 2 and 3, 2016 in Santa Barbara. Class is limited to 10 participants. Please see visit events.VenturaWildlifeGuru.net to sign up or for more information.

Camera trap video clips and ways to share your images and videos:

David Lee is a local wildlife biologist who helps residents, planners, and land managers reduce conflicts with urban wildlife. He interprets and shares news and information about wild critters in Ventura County and beyond. A regular guest blogger for VHC, you can contact Dave for more information about urban wildlife at www.VenturaWidllifeGuru.net